This was a pretty fantastic weekend. Not only was the weather beautiful (low humidity, mid-80s), but I had a marvelous book weekend.

On Saturday morning, I was out and about doing errands (as one does on a Saturday morning). I happened to notice my BN gift card in my wallet and remembered I still had $10 left on it. So I headed for Barnes & Noble because I needed Book 3 in Robin Hobb’s  Fitz and the Fool Trilogy (it starts with Fool’s Assassin). I can’t say exactly why I picked up this series to begin with, but I’m so glad I did. I devoured Book 1.

I read a blurb that said something to the effect that you “fall into” her books. And that’s exactly what happened. I fell in. Despite a bit of a slow start in Book 1, I couldn’t put it down. I became completely immersed in the world of FitzChivalry. And I wanted to have Book 3 on hand for when I finished Book 2.

Well, I found out that Book 3 just came out in hardback. So I have to wait (matching books, you understand).

So what’s a reader to do when stymied from getting the book she intended to buy?

Well, since I thoroughly enjoyed Book 1, I decided to venture more into the world of FitzChivalry with Ms. Hobb’s Farseer Trilogy (which is the beginning chapters of FitzChivalry’s life). Sadly, BN was out of stock on Book 2, so of course, I had them order it for me.

Then I saw the buy-2-get-1-free table (which was too conveniently located near the customer service desk). Within 30 minutes of entering BN, I bought 5 books, more than finished off the gift card, and had ordered a 6th book.

Needless to say, I should never, ever be allowed in a bookstore unsupervised.

To top off the weekend, I attended Neil Gaiman’s talk at Wolf Trap National Park for the Performing Arts. First, if you live in or near northern Virginia, I highly recommend seeing a performance at Wolf Trap—it’s a fantastic venue.

For those of you who might not know Neil Gaiman, he is an author. An amazing author. I have loved all his works since I first read American Gods many years ago. Since then, I have consumed all his works—from the Sandman (DC Comics) to Coraline to Trigger Warnings.

Last week, when I was telling people I was going to see Mr. Gaiman, the one question everyone kept asking was “What’s he going to talk about?” 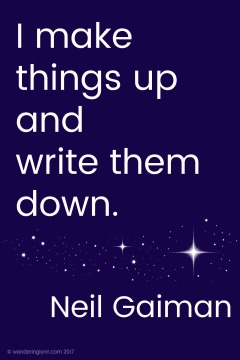 Silly people. It’s Neil Gaiman. He could read the Cheesecake Factory menu and it would be fabulous.

And it was—completely and utterly fabulous. Two glorious hours listening to Neil himself answer questions (questions people had submitted on index cards), read, and just talk to us about his works.

Two of my favorite parts of the night were when he (1) recited the Jabberwocky . . . from memory, and (2) read deleted scenes from the upcoming Good Omens television adaptation. Yes, we got to hear scenes that he had to cut from episode 3 of Good Omens. How amazing is that?

And if you hadn’t heard, yes, Neil himself is writing the script for Good Omens, which is being done by the BBC for Amazon Prime. As Mr. Gaiman said to us last night, “Done by the creative genius of the BBC with Amazon’s budget.” (In other words, it should be more awesome than Starz’s American Gods. And that’s saying a lot because I’ve watched the first few episodes of American Gods and it’s amazingly awesome.)

So a fabulous book weekend all around. And if you ever get the chance to see Neil Gaiman live, DO IT! Two hours flew by and I would have stayed another 2 just to hear him talk more.

What books did you read this weekend? Do you have a favorite Neil Gaiman book? Tell me in the comments below.