Tomorrow starts NaNoWriMo 2017. (That’s National Novel Writing Month which starts November 1.) And after my weekend in Ellicott City, Maryland attending Hallowread and talking to many of the authors, I am rather stoked and motivated to write my 2017 NaNoWriMo novel.

Now if you’re familiar with NaNoWriMo, you know that traditionally NaNoWriMo divided writers into two groups—planners and pantsers.

A planner is just as it sounds, someone who plans her novel by outlining or taking notes or developing some sort of structure. Someone who’s done some preliminary preparation prior to writing.

The keynote speaker at Hallowread, Darynda Jones, is a planner. She spoke at Hallowread about her process, which includes 3 levels of outlining. She has what she calls her skeleton key that gives a synopsis of the story, a 5-9 page outline, and then a detailed 40-60 page outline (which basically becomes her book).

A pantser, on the other hand, is someone who, as it sounds, writes by the seat of their pants. A pantser may have some anxiety prior to November 1, but sits down to a completely blank page on November 1 and just starts writing. 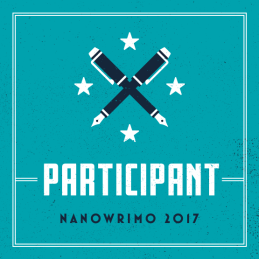 I fall into the latter category. While I love the thought of outlines and notes and all the other things that planners do, come November 1, I always stare at a blank page with no idea of what I’m going to write. Not once in my seven or so years of participating in NaNoWriMo have I ever done any planning prior to November 1.

I admit that during NaNoWriMo 2013, I sketched out a fairly detailed timeline of significant events. But I did that in the middle of writing the novel (around the 3rd week of November) because I had to figure out some backstory timing. (And if I can find the photo of the time line I did, I’ll update the post with a picture of it.)

I admire the planners. Planning a skill I’ve never fully achieved. In school, while I took notes, I never succeeded in doing a course outline (apparently course outlines make it easy to study, but I wouldn’t know since I never did one.) Instead, I tend to wander through life mostly unprepared.

But this year I’m what NaNoWriMo is calling a plantser. No, a plantser in this context is not someone who sits and thinks about plants or someone who plants plants. (Don’t you love when a word can be a verb and a noun?*) A plantser is the combination of both types—someone who has a comfortable mix of improvisation and loose structure.

Last year (and pretty much every other year), I barely had an inkling of what I was going to write. The most I knew is that it would probably be in one of my fave genres, like paranormal or urban fantasy. But this year I actually have something of a synopsis and a loose outline. This year, I have migrated from pantser to plantser.

Weirdly, I’m both comforted and slightly anxious about having even a loose structure. I think my entire mental block against outlining comes from not wanting to be constrained, but to have the freedom and flexibility to go where the story leads. I get that doesn’t make a lot of sense because even authors who outline will tell you that their story doesn’t always end up following the outline. Sometimes outlines have to change for the story to work. But in my world, outlines create a box that’s hard to color outside of.

We all have to be who we are.

This year I will start writing the novel that I actually somewhat outlined. I guess it’s better to say I have some significant notes on what I want to write. So we’ll see how it goes.

Are you a planner, pantser, or plantser? Will you be writing this NaNoWriMo? Share your writing style or story synopsis in the comments below.

Another gorgeous spring day with a beautiful sunset. Life is good.
It’s been an absolutely gorgeous spring day.
After a week of cloudy, rainy weather, the sun is finally peeking through.
My first @puzzlesofcolor and it won’t be my last. This beautiful puzzle, entitled Priceless, was created by artist Melrick Steele. The quality is excellent, the colors are vibrant, and the image is so touching. I greatly enjoyed this puzzle. And I like that it comes with a reusable bag.
Minifigure Puzzle from @lego. While the puzzle itself is super cute, the quality of the puzzle is sadly lacking. Not at all what I’d expect from LEGO. A good number of pieces were flaking, warped, or bent.
Today’s puzzle haul!