I’ve spent the majority of this past week in Brussels, Belgium learning, oddly enough, about the process of tapestry weaving.

Tapestries are often an overlooked art, getting overshadowed by paintings (who doesn’t love impressionism?) and sculptures (hello Winged Victory, Aphrodite, David, and The Thinker). But there are some exquisite tapestries. 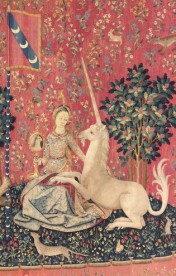 Although tapestries have been around since the Hellenistic Age (the period between 323 BCE to 30 BCE), the art fourished in the Dutch-speaking northern region of Belguim, known as Flanders, which includes Brussels. In the 17th century, Flemish tapestries were arguably the most important productions, demonstrating the intricate detail of pattern and colour embodied in painterly compositions.

One such example of these extraodrinary tapestries are the Lady and the Unicorn, which is the modern title given to a series of six Flemish tapestries woven from designs (called “cartoons”) drawn in Paris around 1500. The set, representing touch, taste, smell, hearing and sight, are on display in the Musée national du Moyen Âge, and are often considered one of the greatest works of art of the Middle Ages in Europe.

Brussels** is an incredible city to visit. I was fortuate enough to visit La Grand-Place, the central square of the City of Brussels, surrounded by the guild houses, the City Hall and the Maison du Roi. In 1998, it made the World Heritage List of the UNESCO.

And not far from the Grand-Place is the Galarie des Princes, one of three galleries constituting all the Royal Galleries Saint-Hubert, located perpendicularly between the King’s Gallery and the Dominican Street. (I took a photo of the sign to remind me because otherwise I would have no idea what these photos were. In fact, I’m not sure why I took a photo of Chez Leon. Apparently, I really liked it.)

And while Belguim chocolate is divine (and I did indulge quite a bit at Neuhaus, so much so I had to buy an insulated bag), no trip to Belgium is complete without checking out all the fabulous Belgian beer. And whereelse would you go in Brussels other than Delirium, which holds the Guiness World Record for the most varieties of beer commercially available.

So an overall fun trip to Brussels. And in the meantime, you can visit early 16th century Brussels via The Lady and the Unicorn. If you’re so inclined, you can check out my review here.

And here’s an update on my #BackpackEurope:

Where in the world are you this week? Share your literary adventures in the comments below.

*Disclaimer: This is a virtual trip. I am not physically traveling in Europe, only visiting there through books. In fact, I’m currently sitting on the floor of my living room, wearing yoga pants and oversized tee, binging Netflix in between books, eating marshmallows, and occasionally petting the cat when he demands attention.

**BUT I really visited Brussels in the summer of 2009 while on a summer study abroad. On that trip, I actually visited the Grand-Place. And more importantly, I found my actual trip photos. So all the photos of Brussels above are ones I took in 2009. The details are a bit fuzzy now, but hey, we really were drinking Belgian beer and I really did buy a Neuhau chocolate insulated bag. So there’s that.

Any and all mistakes about locations, travel, weather, etc., are mine because most of this is a product of my imagination with a few random trivia facts thrown in for fun.