Well, I did it. I broke down and bought a new laptop. I’m not completely giving up on my iMac George. George still has some ability left—it’s just he couldn’t hold a wifi signal. I’d be surfing along and all the signal would drop for no reason. Full bars, no interference. It would just drop.

I tried all sorts of remedies to fix George. But to no avail. (Although I did stop short of wiping and reinstalling his OS. That’s just too much right now.)

So since I still have George, I opted for a Chromebook. 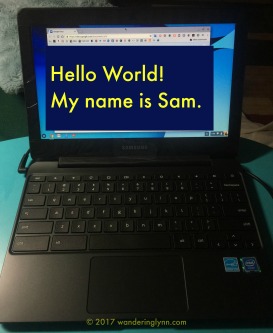 Chromebooks tend to be lean, quick little machines. Not a lot of bells or whistles. This one, a Samsung Chromebook 3, is teeny—an 11.6″ screen, 0.7″ thick, and 2.5 pounds. Plus, it was super easy to set-up. It fully charged in a little less than 2 hours. Then all I had to do was enter my network name and password, and then Google username and password. And viola! I was online in seconds.

Since I mainly needed it to do my blog, a Chromebook was a perfect solution without having to fork out some mega-bucks for a new iMac (although that is the long-term goal). This Samsung was under $200.

I will admit now that I’ve used it to write this post, it will take me a bit to get used to Sam. For example, there is no delete key, only backspace, which is weird. Or maybe it’s weird how often I use delete.

Anyway, I can now blog from the comfort of my couch, or Starbucks, or the park, or even the other side of the world.

And yes, I named my Samsung Chromebook 3 “Sam.” And I may even get him a nametag.