I love to organize and categorize. I routinely organize my collections of my books, music, and coin collection. I have categorized my books by genre, color, alphabetically (by title or author, sometimes both). I get giddy at organizing. I cannot go into the Container Store unsupervised—it’s worse than me going unsupervised into a bookstore.

So I am all for organizing by category. Categorizing items makes finding them easier. But I can tell you that there is such a thing as over-categorizing.

Shocking, I know. But here’s what set me off on the over-categorization.

The other day, I searched for a Lego set of Disney/Pixar’s Wall-e (who doesn’t love that little robot?) The search, of course, resulted in scads of options from all the big retailers that carry toys. Randomly, I clicked on the one for Walmart because it showed a decent price.

As I looked at the item’s page, I scrolled down to see large it was. See, I want a Wall-e for my office, so I didn’t want one too large. (I currently have a 3″ polar bear, 3″ Chloe from The Secret Life of Pets, a 3.5″ Stitch, and a teeny tiny turtle.)

To my surprise and chagrin, the first specification was not size, or age, or color. It was gender.

What?! Why would a toy need to have a gender specification? I understand the age category. Legos, as well as other other toys, can have small pieces, which can be dangerous for small ones. But gender?

And then of course, I saw the gender category: “boys.”

When I was a child, I liked video games, Legos, bike riding, and animals. I had a Barbie, but only the cowgirl one because she winked and had a horse with a jeep and horse trailer (and my Barbie jeep/horse trailer set was NOT pink. It was brown). And now that I think about it, I don’t think I ever asked for a Barbie. I think someone just gave me one for a birthday. Really, I preferred my She-ra (remember her?) over Barbie because despite her ridiculous costume (a short skirt, really?) She-ra carried a sword and kicked some @ss.

So as flummoxed and irritated as I was, I wondered how wide-spread this gender-labeling issue is. I’ve recently read some articles about gender-labeling, but after seeing the Walmart page, I wanted to see this issue in action for myself.

First up, Amazon.com.
No mention of gender in the product info. Just age recommendation as well as the typical info.

So far so good. 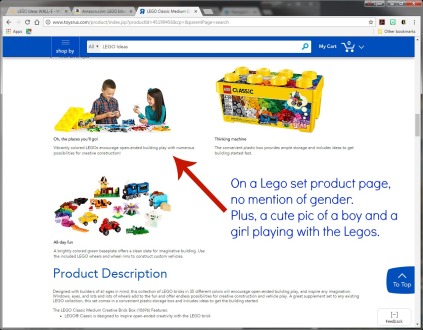 Next up, Toys R Us.com. Toys R Us didn’t have the specific Wall-e Lego set, so I just clicked on the Classic Lego set.

No mention of gender here either.

But … when I clicked on the “shop by” in the upper left corner, the first thing that’s listed is “Boys’ Toys” and “Girls’ Toys,” followed then by “Age.”

(I then went back and looked at Amazon.com’s main toy & game page. No mention of gender. Amazon has age and type of toy categories. And the STEM Club photo shows a girl with growing crystals set. So well done Amazon.)

Let’s get real people. I mean come on, “action figures” are the same as Barbies and those Barbie-like Disney princess dolls. They are both made of plastic. It’s simply the clothing that distinguishes them. So whether you call them “action figures” or “dolls” does not matter. I could take a Barbie and put her in a Wonder Woman costume, or for that matter of fact, I could put her in a Thor costume. Would that make her an “action figure” instead of a “doll?” And more importantly, which category would She-ra fall into—action figure or doll?

And then according to Toys R Us, the top 5 toy categories for boys: (1) the aforementioned action figures, (2) video games, (3) bikes, (4) electronics, and (5) building sets.

I ask you, what message are we sending girls?

I don’t have kids, so maybe this is not new to those of you with children. But this gender labeling of toys gets under my skin. We’re sending a bad message to young girls.

Granted, the two lists of categories end up having almost the same categories with one exception (apparently Toys R Us believes that girls don’t like vehicles, hobby & R/C and instead prefer good hygiene, with the bath, beauty & accessories category. Whereas boys apparently don’t need good hygiene.)

But the fact that any company distinguishes so-called “boy” toys from “girl” toys is ridiculous.

To toy companies and stores, I say: Toys have NO gender! Ditch gender-labels!

I am a firm believer that any kid should play with any toy she or he damn well wants. Building bricks and blocks, cars, video games, dolls, crafts, stuffed animals—it makes no difference. Kids should be allowed to explore and play. If a little girl wants to play army, maybe because either mommy or daddy are in the military, then fantastic. If a little boy wants to wear a tutu and a tiara, maybe because he saw the Nutcracker or some other ballet, then let him.

Let toys just be toys and kids be kids to play with whatever toy they want. Let imagination run wild and allow children to explore and dream. Heck, most of the time, the kids I know get along just find with plain ole cardboard boxes and some markers.

And so allow your child to believe that they can do and be anything regardless of their gender.

What do you think about gender labeling toys? Tell me in the comments below.

Sharing is caring! If you liked this post, please share it on your favorite social media site.